"Nothing makes a fish bigger than almost being caught"

Gawaine Blake has a reputation as one of Australia’s toughest and most experienced fisherman.

Born in the seaside resort of Woolacombe on the coast of North Devon, England, Gawaine’s earliest memories are of a rod in his hand fishing alongside his Dad and Uncle in and around Woolacombe. Little did he know back then that he would become one of Australia’s best anglers and commercial fisherman.

At the young age of 13 Gawaine’s parents along with himself and his brother and sister moved across the world to Rockingham (Rocky) in Western Australia. Gawaine continued his love of fishing in Australian waters and adapted very quickly. He still remembers on looker’s watching in amazement as he reeled in a 22.5-pound snapper off the Pier while no one else could turn a reel.

In 1990 and at the age of 14 Gawaine’s family were drawn to the East Coast of Australia and being a family who has always loved the water– they moved to Rye.

Gawaine has always had an amazing work ethic and left school at the age of 15 to start work for a fishing charter business called Rip Charters. He then went on to work for commercial fishing boats, trapping live parrot fish destined for many popular restaurants in Sydney and Melbourne. They would also catch leather jacket, barracouta and kingfish on hand lines, inside and outside The Heads, to sell through the Co–Op at Queenscliff.

There was also a couple of seasons on commercial scallop boats around the bay and all the way down to King Island where they would often be at sea for days in all sorts of weather. Long lining around Apollo Bay for Gummies and School Sharks would also have Gawaine at sea for up to 5 days – catching, cleaning and packing fish in ice slurries to be sold to our markets and restaurants.

He also worked for legends of the ocean like Lewis Ferrier. Well before electronics and navigation equipment were common place Lewis taught Gawaine how to make a safe pass through huge swells, fog, rips and rocky seas and it was this skill and knowledge that brought him safely home through treacherous seas time and time again.

As his knowledge grew, demand in the industry for his skill was strong and he was poached to work 2 full seasons on squid boats. Gawaine would catch up to 10 ton of squid a night out in Bass Straight fishing from 3pm right though the night, returning around 9am to unload and do it all again. The arrow squid would be sold to factories through the Co–Op  – cleaned, cut, crumbed, boxed and then on sold to fish & chip shops around the country.

Keen to push even further with his love of the ocean, Gawaine studied to obtain a Coxswain licence and at the age of just 17 was the youngest person to hold such a licence.  It was at this time that  Gawaine and his Dad decided to buy a crayfish boat and for 2 years Gawaine and his Dad worked very hard suppling crayfish to restaurants all around the world. The boat was a 32 ft steel boat with 500 horse power diesel engine. Gawaine and his Dad would fish for crays mostly in the rip and out the front by dropping their pots in all weather conditions.

Three years later, after making a big impact in the cray fishing industry Gawaine took on a building apprenticeship and moved to Somers. This is when his love affair with Western Port Bay began.

Soon after settling into Somers, Gawaine bought himself a tinny. With 20 years of knowledge and expertise in how to fish the weather, tide and moon, he worked Western Port Bay out very, very quickly. And the results came.

Over the next few years Gawaine skippered a charter boat for Game Rec Charters on the weekends out of Sorrento, travelled extensively and ran various charter boats around the country and overseas before starting up his own charter company “Think Big” back at his beloved Western Port Bay.

Gawaine has a reputation as the best fisherman Western Port Bay will probably ever see and with a background like his you can see why. He is amazing to watch in action and just a stand up great bloke. With so much knowledge behind him, the fish simply don’t stand a chance when Gawaine is on the water.

Kingfish is certainly one of Gawaine’s favourite fish to target and he has a reputation for consistently catching the big guys throughout the season.  We’re not sure there is a species of fish Gawaine has not perfected catching in our local waters and he consistently seems to find the trophy fish or fish of a lifetime over and over again. Some of Gawaine’s catches includes mako shark 174 kg, thresher shark 167 kg, mulloway 33 kg, snapper 14 kg, gummy 36 kg and crayfish up to 5.4 kg!  These beauties not withstanding, he is an outstanding bread and butter fisherman and a King George Whiting Whisperer.

Gawaine has been a guest on IFish, You Fish, That’s Fishing and Casey Radio’s regular fishing show. He has also written many articles for fishing magazines and has over 300 lecture nights at fishing clubs behind him.

Now Gawaine is ready to teach you everything he knows. So jump on board the Salt Guide and benefit from his lifetime of knowledge as he teaches you how to dramatically improve your fishing and have a safe and enjoyable day out on the water. 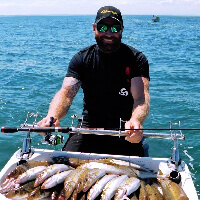 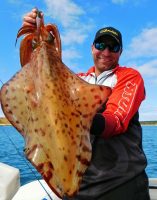 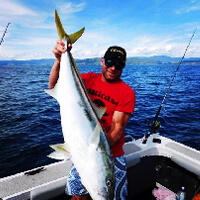